A 55-year-old Caucasian female complained of a six-month history of a progressively enlarging painless left neck mass. She denied dysphagia, dysphonia or any other associated symptoms. Past medical history was not significant for tobacco or alcohol use.

She was treated with Doxycycline without improvement. She was then referred to a local otolaryngologist. Cervical exam revealed a large pulsatile mass that extended deep to the mandibular angle without lymphadenopathy. The remainder of the head and neck examination was normal. Neurologic examination, including shoulder movement, palate elevation, and tongue movement, were normal. On laryngoscopy, there was fullness of the left pharyngeal wall and full mobility of the vocal folds.

Contrasted computerized tomography was performed, demonstrating an avidly enhancing mass of the left carotid space from the level of the base of the styloid process to the level of the carotid bifurcation. Magnetic Resonance Arteriography revealed a 4.9 x 4.5 x 6.7 cm enhancing soft tissue mass at the bifurcation of the left common carotid artery with medial splaying of the left internal and external carotid arteries and multiple flow voids (Figure 1A-C).

After presentation at the MCG-AU Multidisciplinary Head and Neck Tumor Board, she was diagnosed with a paraganglioma, most consistent with glomus vagale. Preoperative angiography and coil embolization of the occipital artery was performed the night prior to surgery (Figure 1D). 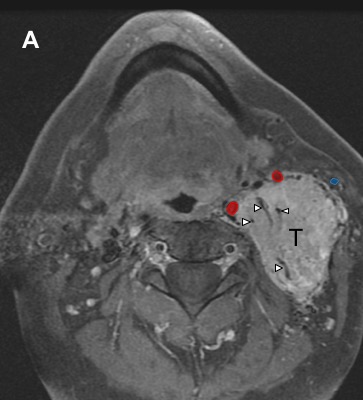 A. Axial T1 MRA with contrast. Both internal and external carotid arteries are highlighted in red, the internal jugular vein is highlighted in blue. T: Tumor. Notice multiple flow voids (arrow heads) in relation to the hypervascular nature of the tumor. 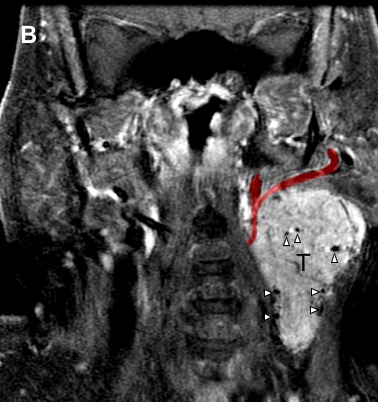 B. Coronal contrast T1 MRA. The common carotid artery is highlighted in red. 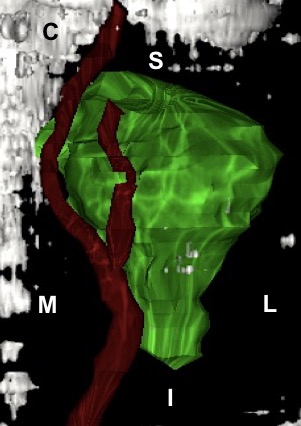 C. 3D reconstruction of the tumor (green) with relation to the common, internal and external carotid arteries. L: Lateral, M: Medial, S: Superior and I: Inferior. 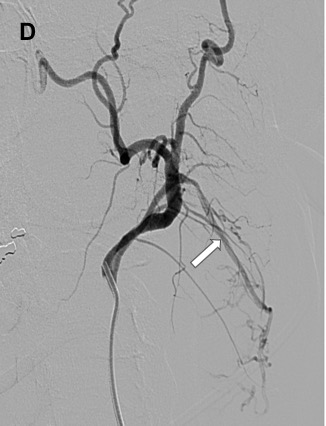 A transcervical approach was used and exposure of the carotid sheath was performed, followed by identification of the internal jugular vein, common carotid artery, and vagus nerve below the mass. Vessel loops were used to control and retract the vessels. Superiorly, the hypoglossal nerve was noted to be stretched over the mass; it was meticulously freed from the mass and was reflected superiorly. This allowed identification of the external carotid artery branches and partial distal control. Dissection of the tumor off the common and external carotid arteries with bipolar cautery and scissors was then performed to expose the carotid bulb. The mass was then freed off the internal carotid artery and was pedicled on the vagus nerve, which was sacrificed (Figure 2). 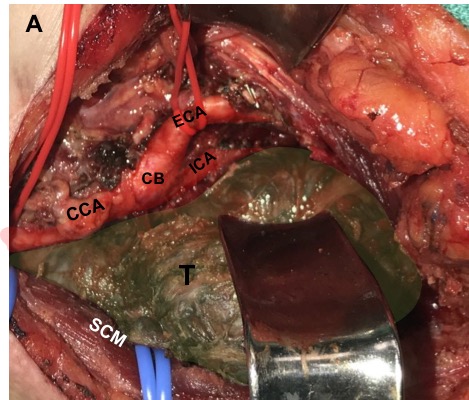 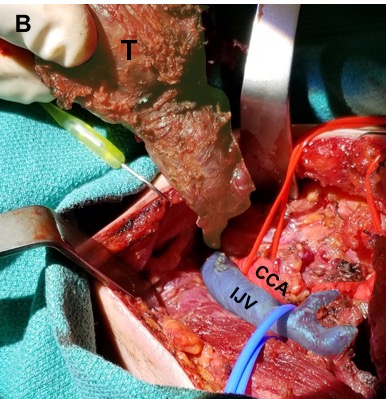 Speech therapy was consulted on postoperative day one, and she was started on thickened liquids with head turn and discharged with an oral diet. She recovered uneventfully with speech therapy and advanced to normal diet. The pathology report confirmed paraganglioma as the diagnosis (Figure 3). 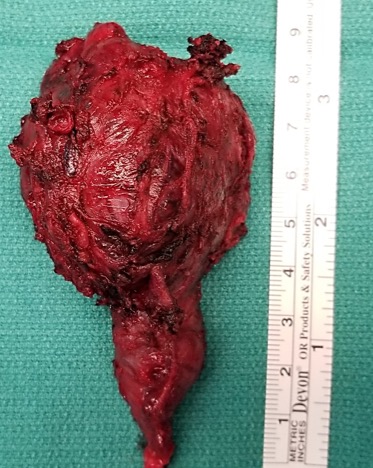 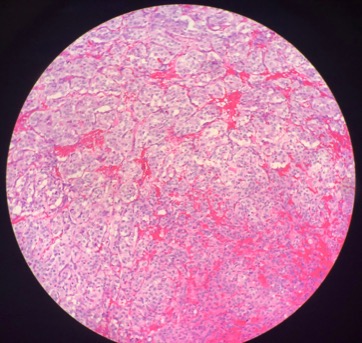 Figure 3. B. Pathology revealed a trabecular pattern of cells within a prominent vascular network.

Glomus vagale tumors are rare, slow-growing, hypervascular neoplasms that develop along the path of the vagus nerve. They are part of the group of tumors referred to as paragangliomas, which occur on sympathetic nerves in the head, neck, thorax and abdomen. Approximately 90% occur in the adrenal paraganglia (pheochromocytomas), and 3% occur in the neck (1). Paragangliomas of the head and neck include carotid body tumors (CBT), glomus jugulare, glomus tympanicum, and glomus vagale tumors. CBT are the most common in the head and neck, followed by jugular foramen, and vagal tumors (around 5% of all head and neck paragangliomas).

Glomus vagale tumors originate from one of the three ganglia of the vagus nerve, most frequently involving the nodose ganglion, and usually start within 2 cm of the vagal nerve’s extracranial course. The most frequent presentation is a neck mass with hoarseness. The female:male ratio is approximately 2:1, with a mean age of diagnosis around 40 years (2). They tend to displace the carotid anteromedially, as seen in this case. CBT and glomus vagale tumors can be difficult to differentiate on physical exam due to their location, however, imaging can help to differentiate based on the pattern of splay of the carotid arteries (3).

Paragangliomas of the head and neck may be treated with surgical resection or radiation, depending on the morbidity of resection, size, and patient comorbidities. Complete resection of vagal paragangliomas usually requires removal of the associated vagus nerve, thus creating a unilateral vocal fold paralysis and pharyngeal plexus deficit, along with pharyngeal hypesthesia and velopharyngeal insufficiency. Even when the vagus nerve is not transected, the nerve still fails to function postoperatively in most cases. A local control of 93.3% was observed after surgical resection at an 86.7-month follow-up in a meta-analysis (4). In a series of 10 patients, a 100% local control was achieved at 156 months’ follow-up without severe complications or cranial nerve deficit (5). Because glomus vagale tumors have the greatest propensity for malignant behavior (19%) (6), radiation therapy is considered for residual disease. Embolization of large paragangliomas decreases vascularity and blood loss in large tumors, at the expense of a brisk inflammatory reaction that makes dissection more difficult and carries a small stroke risk. If embolization is considered, it should be done between 24-48 hours to minimize scar formation around the tumor and to prevent recruitment of other blood vessels (7). Although the incidence of catecholamine secretion is low in head and neck paragangliomas, screening of urine or plasma catecholamines should be considered preoperatively, especially in patients with suggestive symptoms.

Radiation therapy has an excellent local control rate (>95%), however, it requires a 5-week treatment and the radiation dose is higher (45Gy) (8). Stereotactic radiation therapy is suitable for paragangliomas of less than 3 cm with a dose between 12.5-15Gy. In a cohort of 43 patients with 47 tumors observed for 5 years (9), the mean growth rate was of 2mm per year. Overall, 42% remained stable, 38% grew, and 20% regressed.

In summary, glomus vagale tumors are paragangliomas treated similarly to carotid body tumors. Control of vasculature intraoperatively is important for safe surgery, and embolization may be considered for large tumors. Recognizing the vagal origin of the tumor is important for patient counseling due to the high likelihood of nerve sacrifice and postoperative vocal fold paralysis.