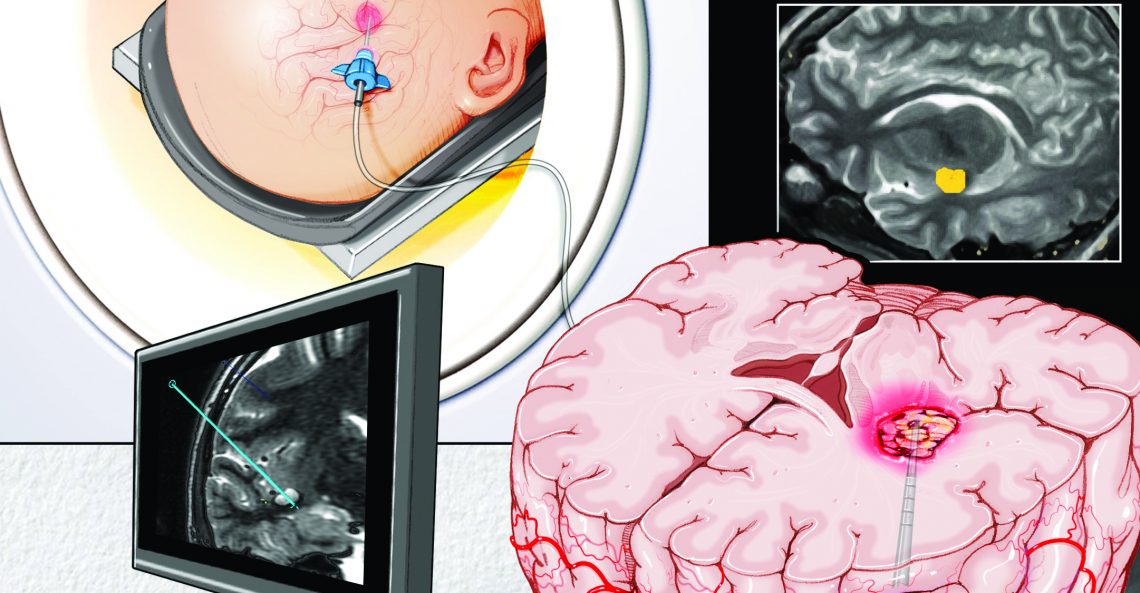 Although stereotactic thermocoagulation of small intracranial lesions in humans has been used for 70 years1, a new twist in technology has resurrected a keen interest in ablation for a variety of neurosurgical disorders. By using MRI sequences capable of displaying tissue temperature, real-time observation of the growing heat map is possible as a laser-tipped probe delivers focal heat to create an ablative lesion. This allows the surgeon to either discontinue the treatment in order to limit high temperatures near critical structures, or to repeat the treatment as needed to encompass the desired region.

The laser ablation procedure is invasive because it entails stereotactic insertion of the fiberoptic probe. But because all that is required is a 3 mm twist drill hole made through a 3 mm scalp incision, the routine surgical risks are low and hospital stays are only one to two days. More importantly, laser ablation allows treatment of small, troublesome lesions not easily resected through a craniotomy either because their location is unfavorable or because they cannot be distinguished from normal tissue with the naked eye.

Potential targets for laser ablation include metastatic and primary tumors as well as those not amenable to treatment by other methods such as radiosurgery. For example, cavernous angiomas do not respond to radiation, and yet they can be safely eliminated with laser ablation2. Laser ablation is also effective for lesions that are often not easily treated with radiosurgery, such as benign tumors, hypothalamic hamartomas, the tubers of tuberous sclerosis, and epileptic foci3. Furthermore, unlike radiosurgical treatment, laser ablation carries no risk of radionecrosis or the occurrence of radiation induced tumors. In fact, laser ablation has been used to eliminate necrotic tissue following complications of radiosurgery.

Laser ablation in its present form is new, and indications are still being refined and discovered. Although this technology will not replace craniotomy or radiosurgery, its ability to ablate lesions that are either difficult to resect or unresponsive to radiation is proving to be a welcome addition to the neurosurgical armamentarium.

Laser ablation depends heavily on stereotactic technique and precision. Although our preference is for framed stereotaxis, some centers use frameless methods. Ablation usually proceeds under general anesthesia because the patient must be absolutely still during the MRI sequences. In the operating room, the stereotactic apparatus is used to guide placement of the fiberoptic laser through a small skin incision and a twist drill hole in the skull (Fig 1). The patient is then brought to the MRI suite, where images are obtained to display the entire length of the laser probe. The laser is then activated while sequential MRI scans are obtained that show a color map in real-time of the rising tissue temperatures (Fig 7), as well as an estimate of the tissue that has been destroyed (Fig 8). Laser probes are available with differently shaped tips, allowing the surgeon to create elliptical or spherical lesions depending on the choice of probe, and some laser probes can direct the laser light perpendicular to the axis of the probe for greater flexibility. While watching the expanding color map of temperatures superimposed on the MRI images, the neurosurgeon can decide when to end the ablation based on the size of the lesion and on adjacency to critical structures. The lesion can be repeated, and the probe can be inserted or withdrawn to create lesions of various shapes most suited to the target. MRI sequences can then be obtained immediately to document the size and shape of the lesion. The patient is then brought back to the operating room, the fiberoptic probe removed, and the wound closed with a single stitch.

Case One: Cavernous Angioma and Epilepsy

A 15 year-old girl presented with a 10 year history of complex partial seizures occurring two to three times per week. The seizures were recalcitrant to medical therapy and characterized by unresponsiveness, head turning to the right, and automatisms. An MRI scan showed a one cm lesion consistent with a cavernous malformation surrounded by hemosiderin, located in the right temporal stem adjacent to the inferior insula (Fig 2). An associated developmental venous anomaly (DVA) was noted in close proximity to the lesion. Interictal EEG showed right-sided temporal spikes. A Wada test showed left language dominance and suggested that either a right or left temporal lobectomy would confer a high risk of verbal memory loss. She was doing well in school and hoped to attend college.

Phase II implantation of five SEEG depth electrodes was performed to sample the region adjacent to the lesion, the hippocampal area, the temporal and frontal opercula, and the insula. The ictal data was consistent with seizure spread from the region of the lesion to the temporal opercula and insula. Because of her high functional status, the family chose laser ablation rather than a lesionectomy through a craniotomy.

Her operation began with general anesthesia, attachment of a stereotactic frame and acquisition of a planning MRI with contrast. Several trajectories were considered, and the approach felt best to target the lesion while avoiding the DVA and other cerebral vessels entered through the inferior frontal lobe and traversed the insula (Fig 3 to 6). The fiberoptic laser was placed through the lesion using this trajectory, and the patient was brought back to the MRI suite for the ablation. A lesion was made using a laser tip with a length of 10 mm while monitoring the heat map and ablation zone (Fig 7 and 8), then repeating the process twice so that the final lesion encompassed the hemosiderin boundary and the inferior portion of the insula (Fig 9). Moving the tip for an additional lesion was not necessary. The patient returned to the operating room, the probe was removed and the wound closed with a single stitch. The patient awoke without neurological changes and was discharged on the second postoperative day.

A nine year-old boy presented with a three year history of complex partial seizures occurring three to four times each week despite maximal medical therapy. Generalized seizures were infrequent but required stabilization in the ICU. An MRI showed regions of abnormally thickened gray matter along the surfaces of the right lateral and medial parietal lobe, (Fig 10) consistent with cortical dysplasia. Spike and wave patterns with focal slowing were detected over these regions with interictal EEG monitoring, although ictal recordings showed only a right posterior onset and were poorly localizing. Magnetoencephalography (MEG) showed multiple sites of dipoles throughout the region of the MRI lesions.

Because of the size of the MRI lesion and the diffuse ictal EEG findings, it was not feasible to resect the entire region of interest. To better localize seizure onset, ten SEEG depth electrodes were inserted for Phase II monitoring of the right posterior quadrant, guided by the MEG studies, the MRI findings, and the preoperative EEG. The pattern of rhythmic discharges revealed three areas of onset within the medial and lateral right parietal lobe, each approximately correlated with areas of cortical dysplasia identified by MRI.

Surgical options included resection of the region thought most likely to be epileptogenic, with the potential of further resection in a staged fashion if the seizures continued. Rather than accept the possibility of a series of craniotomies, the family chose laser ablation as the means of removing the epileptogenic zones. Review of the EEG data suggested that the most active region was the component in the right posterior medial parietal lobe (Fig 10).

The steps of the operation were as in Case 1. A probe trajectory was planned so that the ablated area would include the most active contacts of the SEEG electrodes and maximize the amount of included abnormal tissue (Fig 11). After visualizing the laser probe on an MRI image (Fig 12), a lesion was created and then repeated to increase its diameter. The probe was then withdrawn 7 mm and a lesion created, resulting in cylinder-shaped ablation (Fig 13). As before, the probe was removed, the wound closed with a single stitch, and the patient discharged without neurological changes on the second postoperative day.

Laser ablation is a new method by which small, difficult lesions can be ablated under real-time monitoring without the need for a craniotomy. Cases have been reported for its use to treat metastatic and primary brain tumors, hypothalamic hamartomas, cortical dysplasia and other epileptic foci, temporal lobe seizures (by ablation of the hippocampus and amygdala), cavernous malformations, progressive radionecrosis and stroke-induced edema. Advantages of the technique include the ability to ablate tumors not easily treated with craniotomy or radiosurgery, applicability to patients too ill for open surgery, the possibility of staged and repeated treatment, the lack of risk of oncogenesis, an immediate therapeutic effect and a shorter hospital stay and a shorter time to adjuvant therapy. However, experience is early, and most of these promising initial results have not yet been followed by randomized, controlled studies. It is likely that laser ablation will nevertheless prove to be a useful neurosurgical tool, and that its appropriate place in treatment strategies will be determined by the data accruing from this very active field. 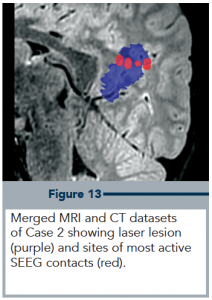