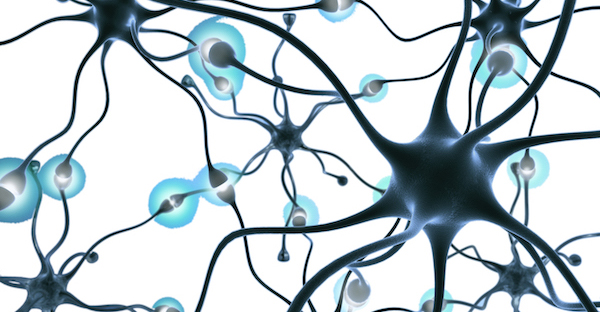 A 16 year-old African-American girl presented with initial symptoms of stomach pain, vomiting, weight loss, right lower extremity numbness, fatigue and generalized weakness. She was treated with steroids for possible Crohn’s disease and improved. Four months later, however, she developed numbness in her hands, legs and torso with concomitant bowel and bladder incontinence. She was admitted to the MCG PICU for a more extensive work-up. Cervical MRI showed extensive cervical spinal cord lesion burden with enlargement of the cord, whereas MRI of the brain was unremarkable. CSF studies revealed elevated IgG synthesis and oligoclonal bands, and visual evoked potentials showed some mild abnormalities in the left eye. Laboratory tests for infectious and rheumatologic disorders was unrevealing. Due to concern for a neoplastic process, she underwent cervical spine biopsy, which showed demyelination, and furthermore, Aquaporin-4 antibody testing came back positive. Based on the above results, she was diagnosed with neuromyelitis optica (NMO), aka Devic’s disease, in March of 2009, at the age of 17.

She had minimal improvement with IV SoluMedrol, plasmapheresis (PLEX) and IVIG. She suffered a reaction with her initial dose of Rituxan, and her parents refused further treatment with this drug. She was subsequently started on Imuran and had gradual improvement with inpatient rehabilitation. She went on to have two relapses in the fall of 2009 with unilateral vision loss and sensory changes, which improved partially with SoluMedrol. Imuran was titrated up to 150 mg BID, and she was referred to the Center for Pediatric Onset Demyelinating Disease at the University of Alabama, for a second opinion; the diagnosis of NMO was confirmed, and the recommendation was to continue Imuran.

For the next several years, she continued on Imuran 150 mg BID with intermittent noncompliance leading to a relapse in 2011. However, she restarted Imuran and was stable for two years, until January 2013, when she had a severe relapse marked by the development of a new cervicomedullary lesion. She was critically ill, and her course was complicated by both pancreatitis and neutropenia. She had an extended hospitalization requiring intubation and PEG tube placement. Imuran was held during the time because of neutropenia. Following discharge, she restarted Imuran 100 mg BID with plan to titrate to her usual dose of 150 mg BID. However, several months later in November of 2013, she had a relapse consisting of blurred vision with increased nystagmus, decreased motor control of her left upper extremity and difficulty in ambulation. MRIs demonstrated a new cervical enhancement and optic neuritis of her right eye. Despite additional treatment with PLEX, her symptoms worsened, her cervical lesion progressed and she required readmission to the hospital in December. Imuran was again discontinued, and she was given her first dose of Mitoxantrone without complications. Prior to infusion, her cardiac ejection fraction was normal, and she tolerated the medication well. Despite this new treatment, she again relapsed shortly after the infusion and was treated with IVIG rather than PLEX due to the recent Mitoxantrone infusion. Following the hospitalization, she continued to receive Mitoxantrone infusions every three months. Follow-up MRIs remained stable. By January 2015, she had completed five rounds of Mitoxantrone and had received close to half the recommended cumulative lifetime dose. Given her clinical and radiographic stability combined with total-dose limitations, a decision was made to spread her infusions to every six months.

Two months later, in March 2015, she unfortunately relapsed once again with cervical enhancement. She was treated once again with IVIG and continued with the Mitoxantrone in April 2015. Despite this, she relapsed six weeks later with extensive enhancement of the lesion from C1-6. At that time, Alexion was enrolling patients in a trial evaluating the efficacy of Eculizumab for NMO, and we decided to try it. However, before the Augusta University MS Center could be enrolled as a site, the patient relapsed yet again. She was treated with Methylprednisolone and PLEX. Rituxan was retried with premedication of diphenhydramine, acetaminophen and SoluMedrol given her previous infusion reaction. She tolerated it very well and was discharged to inpatient rehab a week later. She has been clinically and radiographically stable on a regimen of Rituxan 1g every three months since that time.

She is improving clinically, but at the young age of 23, she unfortunately has to cope with daily symptoms of gait impairment, neurogenic bladder and bowel dysfunction, dysesthesias, muscle spasm, vision impairment, headaches, arm tremor and fatigue. Both her strength and sensation are reduced in the extremities, and she ambulates with a hemi-walker. She continues to participate in physical and occupational therapy at home. She is followed closely by neuro-ophthalmology for rotatory nystagmus at rest and in all directions of gaze. Despite her limitations, she possesses an admirable and infectious grit going so far as to organize fundraisers to expand NMO research.

Neuromyelitis optica is a rare, disabling autoimmune disorder that causes demyelination to the central nervous system and is characterized by relapses. NMO predominately affects the optic nerves, spinal cord and brainstem often causing symptoms of sudden vision loss, weakness, sensory loss, bowel or bladder dysfunction, vomiting and hiccups as seen in the case example above. Patients rarely recover fully from relapses, leading to rapid accumulation of disability. Neuromyelitis optica spectrum disorder (NMOSD) is an inclusive term referring to both patients with NMO and patients who have aquaporin-4 antibodies with either recurrent transverse myelitis without optic neuritis or recurrent optic neuritis without a history of transverse myelitis. Similar to multiple sclerosis, NMO affects women more commonly than men with a female-to-male ratio of at least 3:1. Although many patients receive immunosuppressive therapies to prevent relapses, currently, there are no approved therapies for the treatment of NMO. As in this case, acute relapses are typically treated with high-dose corticosteroids, plasma exchange, IVIG, immunosuppressant or a combination of all the above. Unfortunately, this combination is not enough to prevent relapses and progressive disability as highlighted by this case. Further research into effective disease-modifying treatments is desperately needed. Here at the Augusta University Multiple Sclerosis (MS) Center, we strive to provide the very best care possible by offering both proven and cutting-edge therapies to achieve optimal outcomes. We embrace a multidisciplinary and comprehensive approach to treat our diverse and often very ill population. We participate in clinical trials to help bring better medications to the market.

The Augusta University MS Center was recently selected as a participating center for a phase 3 trial to confirm the safety and efficacy of Eculizumab for the treatment of NMO. Eculizumab is a recombinant, humanized monoclonal IgG2/4 antibody approved by the FDA for treatment of paroxysmal nocturnal hemoglobinuria and atypical hemolytic uremic syndrome. It is a terminal complement inhibitor, suggesting it may reduce relapse and prevent disability accumulation in NMO. In a recently reported, investigator-initiated trial of a highly relapsing NMO patient population, Eculizumab reduced the annual relapse rate from a median of three relapses per year to zero relapses per year (p<0.0001). The trial is a randomized double-blind, parallel-group, placebocontrolled, multicenter, time-to-event study. The good news is that patients may remain on a stable maintenance dose of immunosuppressive therapy while in this trial. The primary endpoint of the trial is to assess the efficacy of Eculizumab treatment as compared with placebo in relapsing NMO patients based on the time to first relapse and relapse risk reduction. The secondary endpoints are to characterize the overall safety and tolerability of Eculizumab and to evaluate the efficacy by additional measures including disease-related disability, quality of life, neurologic function and annual relapse. Our hope is that by participating in this trial, among others, we can realize better treatments for our NMO patients. We welcome referrals for treatment of all demyelinating disease and are currently also enrolling in a number of clinical trials for both disease-modifying therapies and symptomatic management of multiple sclerosis.