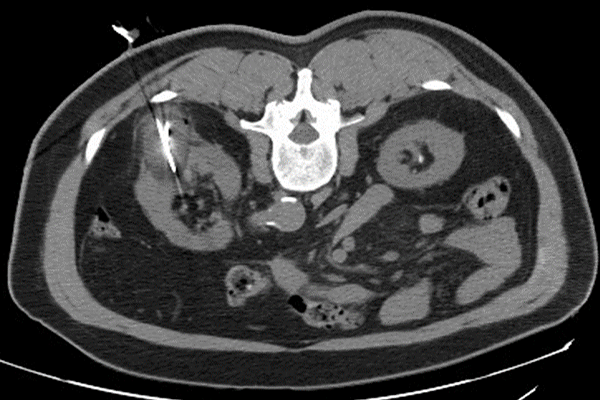 Chemotherapy, immunotherapy, radiation and surgery are the four most common ways to treat many forms of cancer. But for some types, such as kidney cancer, there’s another option. It involves small incisions, small needles and ice to tear the tumor down so the body’s own immune system can eat the cancer cells, curing the cancer.

One of those solutions has shown promise in curing kidney cancer in patients with a tumor three centimeters or smaller. According to Freedman, a meta-analysis looking at multiple research reports on patient outcomes found a 94% cure rate for patients who underwent cryoablation, a procedure where a tumor is frozen, thawed then frozen and thawed again.  Just like a garden hose filled with water and left out for the winter will rupture from the ice, so do the cancer cells.  The process causes the cancer cell membrane to rupture and the cells die. Then, the body’s own white blood cells move in and eat the dead cells, removing the tumor from the body.

“A lot of times, I can do the cryoablation without anesthesia,” Freedman said. “We don’t leave a big scar from a big incision like some surgeries. We do our work through small skin nicks. This means we are able to send our patients home the same day and their recovery time is faster, so patients are back to living their regular lives sooner.”

Cryoablation begins with the patient lying on his/her stomach or sometimes their back.   Then, Dr. Freedman or Dr. Hal “Greg” Bowers, the other interventional radiologist at Augusta University Medical Center, and the team obtain a CT scan using barium lines that show up on a CT scan. The scan shows the tumor’s location in relation to the grid lines. This shows the interventional radiologist where he needs to insert the needle, also known as cryoablation probe, to reach and freeze the entire tumor. Having the X, Y and Z planes localizes it perfectly for where he needs to insert the needle.

Sometimes, he will need to use multiple probes depending on the size of the tumor. Once the needles are inserted through those small incisions, compressed argon is allowed to flow through the probe and expand at the tip lowering the temperature around the tumor to -40 degrees centigrade. At first, the fluid around the tumors start to freeze, then the freezing spreads to the cancer cells. The idea is to create a big ball of ice encasing the tumor mass. Freedman then thaws the mass and refreezes it before thawing it one final time.

“The kidney is mostly water so we can see where the lower density ice ball forms, on CT scans. This low density also explains why ice cubes float.”  Freedman said. “I don’t know of many solid tumors in the body that are cured without surgery and the patient goes home the same day. To me, that’s the most exciting thing I can share.”

The American Cancer Society’s “Cancer Facts and Figures 2020” report estimates there will be just under 74,000 new cases of kidney cancer diagnosed this year. Most people diagnosed with kidney cancer are older, with an average age of 64 years. It is more common in males, with African American males showing a higher rate of diagnosis. According to ACS research, the rate of new kidney cancer cases has been on the rise over the last 20 years.

“One sign of kidney cancer is blood in the urine,” Freedman said. “however most often kidney cancer is discovered incidentally, frequently by CT, MRI or ultrasound scans. On example would be a patient going to the emergency room with abdominal pain who undergoes a CT scan.  The mass is the discovered and requires further testing.

“We perform a diverse group of procedures on all different body organs,” Freedman said. “The kidney is only one small portion. Most places in the body can be reached with the proper imaging and interventional techniques. We can reach most areas of the body safely if we know where we’re going.”