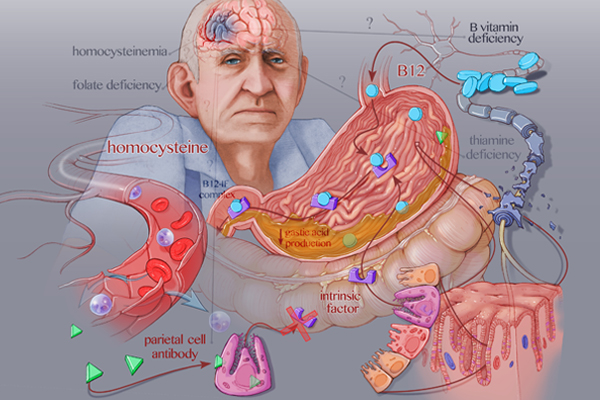 In most neurology clinics we are checking B12 levels, but often not checking folate, homocysteine, or thiamine. At the VA Medical Center in Augusta, it is quite common to find patients with one or more B vitamin deficiencies and/or homocysteinemia. The risk for these B vitamin deficiencies and especially thiamine and B6 increases in the setting of malnutrition or excessive alcohol use. Interestingly, many veterans with either a regular use of alcohol (such as a few drinks per week) or distant history of excessive alcohol years or decades ago are found to be thiamine deficient.

Out of these deficiencies, B12 may be the most common. One of the big challenges is to determine what level constitutes a B12 deficiency since lab reference ranges vary around the world. Most US lab reference range for B12 is 200-900 pg/ mL. We know from experience that many people have neurological or systemic symptoms and findings such as macrocytosis, and elevated methylmalonic acid or homocysteine levels at the lower levels in the reference range. Therefore many neurologists in practice prefer a B12 level at least in the high 400s/500s or higher.

Higher B12 levels are preferred if there are symptoms or findings such as macrocytosis, methylmalonic acid or homocysteinemia. Interestingly, in Japan the reference range for B12 is set higher at 500-1300 pg/mL. It may be more prudent to keep B12 levels higher since many patients with mild deficiencies and vague symptoms are getting missed and concurrent homocysteine or methylmalonate levels are not checked. There are no toxic effects with higher B12 level.

B12 deficiency can lead to neuropathy, dementia, myelopathy due to subacute combined degeneration, and vague symptoms such as fatigue, cognitive problems, and paresthesias. B12 and /or folate deficiency may manifest as depression. In a study published in the American Journal of Psychiatry of 700 disabled non-demented women age 65 or older, those with B12 deficiency were twice as likely to be depressed. Folate and B12 are needed to form S-adenosylmethionine, which plays a role in serotonin production. Neurological symptoms can be seen even without anemia or macrocytosis.

B12 is mainly obtained from animal sources (mainly meat and very small amounts in egg and dairy products). Many factors can lead to B12 deficiency and just including meat in your diet is not enough to prevent a deficiency in many cases. One reason is that B12 is more difficult to absorb than other B vitamins due to a complicated process of digestion. With aging, there is reduced gastric acid production which is needed in the digestion of B12. In the US at least 15-20% of the elderly are estimated to be B12 deficient.

In addition, various medications which lower gastric acid production such as H2 blockers and proton pump inhibitors are associated with deficiencies. Other medicines associated with B12 deficiency include Colchicine, Metformin, Chloramphenicol, and many others. Bariatric surgery increases the risk for B12 and other vitamin deficiencies. Those who follow either a vegetarian or primarily vegetarian diet almost inevitably will become B12 deficient and therefore adding B12 supplementation is crucial in this situation. Anecdotally, even supplementing B12 one to three times per week in vegetarians who are not already significantly deficient may be enough to prevent deficiency. A rare condition which should be considered especially with very low B12 levels is pernicious anemia caused by parietal cell antibody. This condition may warrant lifelong B12 intramuscular injections.

A good example of neuropsychiatric symptoms in a patient found to have a paretial cell antibody and severe B12 deficiency:

Case 1: A 52-year-old veteran woman of Indian origin (vegetarian and a non-alcohol user) had a severe B12 deficiency with a level of 75 pg/mL and a CBC showing an MCV of 95, and folate 13 ng/ML in 2008. The level was 112 pg/mL in 2013, 103 pg/mL in 2014, and with B12 1000 mcg injections every 1-2 months increased only to 188-219 pg/mL in 2017 and 2018. Homocysteine could have been normal at 9 umol/L in part due to a normal folate of 15 ng/mL. CBC gradually transitioned from a relatively high MCV to normal or low MCV due to concurrent iron deficiency anemia. She had severe depression for years and occasionally would have auditory hallucinations such as hearing the voice of her mother who had passed away. Laboratory testing showed a mildly elevated parietal cell antibody of 23 (reference is less than or equal to 20). Her B12 IM injections were increased to 1000 mcg every two weeks with a resultant level of 578 pg/mL. Though her depression was still quite severe, she still felt better than she had in years since her energy levels were much improved, mood was relatively better, and hallucinations had resolved. Since parietal cell antibodies may be hereditary, her children who were in their 20s were tested and found to have low B12 and they were started on supplementation.

Another patient case illustrates that checking B vitamin levels and homocysteine levels even with vague symptoms can be revealing;

Case 2: This patient was a 47-year-old African American veteran (non-alcohol user; occasional drinker 1.5 years prior) who had made changes in his diet by cutting down on meat and fats. He was also on Colchicine. He had vague symptoms of numbness/paresthesiasRemove featured image and radiating neck pain which could have been attributed to cervical radiculopathies found on EMG study and chronic radiating low back pain with numbness/paresthesias in the feet without signs polyneuropathy on exam. Lab testing showed severe B12 deficiencies with a level of 120 pg/mL, homocysteine level of 159 (reference range normal is 11.4 or less), folate level of 3.95 (reference range is 7.3-26.1), and repeat labs the next day were consistent and showed a B12 level of 105 pg/mL, folate level 4.29, and homocysteine level of 178.9. Testing parietal cell antibody was negative. His thiamine level was mildly reduced at 7 (reference range 8-30). He improved his diet, started treatment with B12 injections, oral folate, and opted not to take thiamine supplementation. His resulting levels were a B12 level of 760.7, a folate level of 26, B1 level of 17, and a homocysteine level of 10.6.

Homocysteinemia occurs due to genetic and acquired factors (most importantly deficiencies of folate, B6, and B12). Homocysteinemia has been known theoretically to increase risk for cardiovascular problems such as myocardial infarctions and stroke. Past studies have shown inconsistent results on whether supplementation is beneficial. A compelling 2013 study suggests that we revisit this question of homocysteinemia. This study was of 156 patients with mild cognitive impairment: 76 received placebo, 80 received a B vitamin combination of B12, folate, and B6. MRI brain scans were obtained at baseline and at 2 years and were analyzed by voxel-based morphometry protocol for assess gray matter volume. The B vitamin group had a significant reduction of atrophy compared with the placebo in bilateral hippocampus, parahippocampal gyrus, retrosplenial precuneus, lingual and fusiform gyrus, as well as the cerebellum. The average loss of gray matter in the placebo group over 2 years was 3.7% ± 3.7 as compared to 0.5% ± 2.9 in the B vitamin group. Patients with the higher homocysteine level in the placebo group had higher atrophy. In the B vitamin group, there was no difference in the degree of atrophy in those with low or higher baseline homocysteine levels. The atrophy which was reduced was in the areas known to be involved in Alzheimer’s disease.

It is not known if folic acid deficiency alone leads to neurological symptoms or disorders. Studies on the benefit of folic acid supplementation and cognitive functioning have shown inconsistent results. It is known that folate deficiency can cause homocysteinemia, and therefore may indirectly lead to neurological issues. Methyl-folate may be more effective in treating homocysteinemia. Also, it is important to realize that folate supplementation may mask anemia and homocysteinemia due to concurrent B12 deficiency. This could be dangerous since without correcting for B12 deficiency the resultant neurologic or neuropsychiatric disorders could still persist or ensue.

Severe thiamine deficiency is well recognized as causing cognitive problems and when severe resulting in Wernicke’s Encephalopathy and Korsakoff syndrome. It can also cause subacute or acute progressive cognitive deficits which may progress and become irreversible if not treated in time.

Case 3: A 70-year-old Caucasian veteran patient (drank about 4 beers/week for years) with was admitted due to progressive problems with cognitive impairment worsening over 2.5 months into confusion and hallucinations and leading to a hospital admission. He did not have a history of fevers, extensive vomiting, diarrhea, or obvious illness. He had an extensive unrevealing workup including an MRI of the brain (showed mild atrophy), EEG, CSF studies. Further history revealed that around the time he began having cognitive problems he also had reduced oral nutrition due to nausea from a medication. He had a rapid improvement after treatment with high dose IV thiamine especially with a resolution of hallucinations and extreme confusion. He didn’t return completely back to baseline and still had resultant problems with short-term memory and executive functioning. Without treatment, however, he could have progressed to a devastating neurological deficits. Lab testing did show a thiamine deficiency (<7 nmol /L and reference range is 8-30).

Hannibal L, Lysne V, et al. Biomarkers and Algorithms for the Diagnosis of Vitamin B12 deficiency. Frontiers in Molecular Biosciences 2016; 3(27)1-12